It looks pretty big to be a cover, but I suppose they'll fit it somehow.. I like this lineup (even if Storm and Psylocke aren't there) and I heard that this lineup isn't really permanent and it'll change a bit in the future (as long as Kurt and Rachel stay on I'll be happy though):bamf

These two arcs have been great and have only furthered my newfound obsession for Rachel:shifty As long as Brubaker keeps her as a prominent part of his run, I think I'll be pleased with it.. 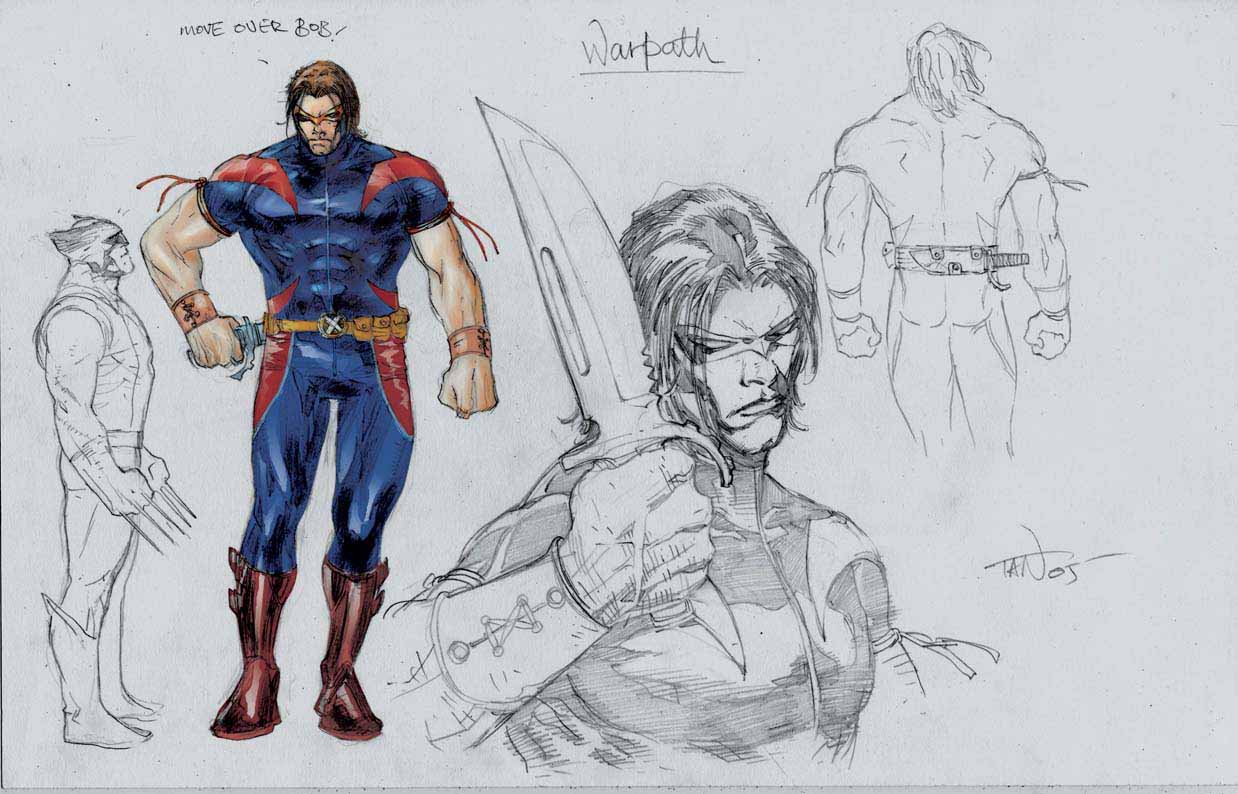 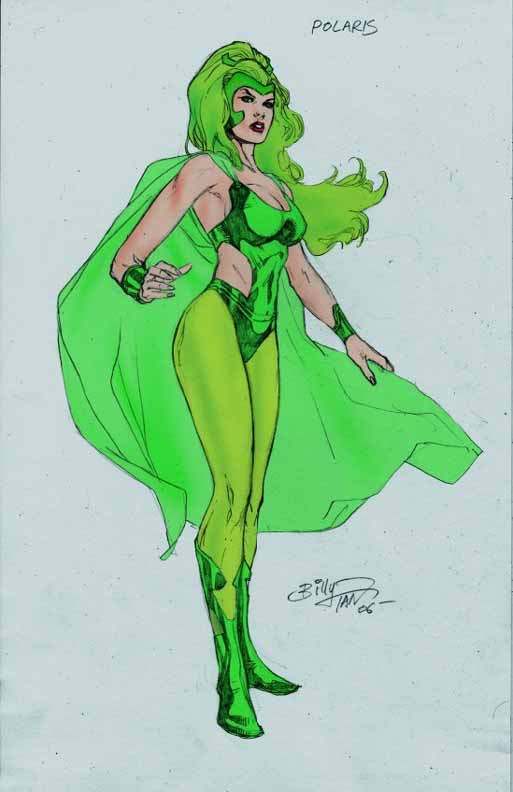 And from the upcoming annual: 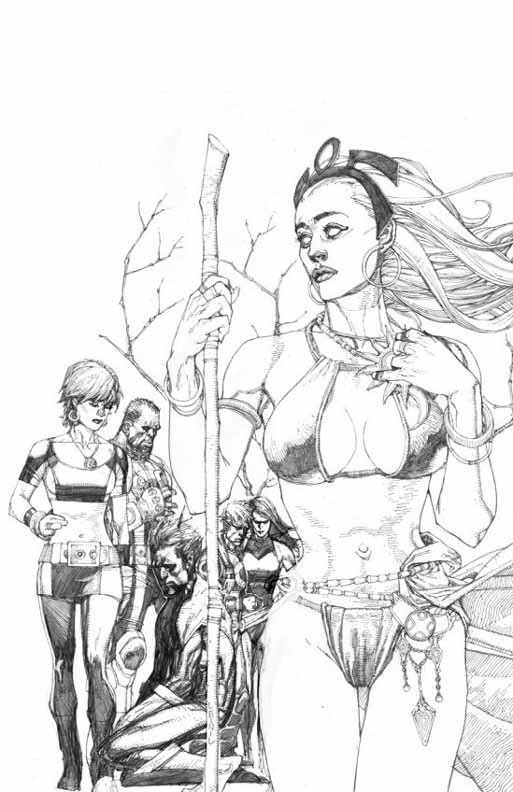 The Uncanny X-Men Annual in June, by Chris Claremont and Clayton Henry with a cover by Leinil Yu, will deal with some tough decisions Storm has to make

I was pretty happy that Storm was at least included in the last issue and that Claremont somewhat explained why Wolverine wasn't around.. though I'm not sure how he was sanctioned by O*N*E to leave the mansion, let alone the country.. maybe it's an Avenger thing

Originally posted by Tyros
And from the upcoming annual:

The Uncanny X-Men Annual in June, by Chris Claremont and Clayton Henry with a cover by Leinil Yu, will deal with some tough decisions Storm has to make

And for a woman that's about to get married Storm doesn't look too thrilled either...in fact, NONE of them do...

The Librarian ~ Keeper of Elfin Facts

A Touch Of Velvet

I guess it could be that she announced she's officially leaving the team:( which will really suck, cause she's one of my favorite X-Men.. I guess Rachel is my favorite X-Lady now, if Storm really does quite..

that's so green my eyes are burning :o (Polaris)

Wolverine has a knack of doing that doesn't he? Maybe the covers were drawn before the story was?? I think that's how it worked with the first four issues of Nightcrawler anyway.. I liked Lorna's purple oufit much better.. it kinda made her look like a witch (they could've called her the Lavender Witch if she somehow got Wanda's powers):LOL:shifty

So what did everyone think of Uncanny #470?

[spoiler]I think it's dragging along a bit...I mean we're pretty much setting up for the big fight at the end where Rachel goes Phoenix on the Shi'ar's asses. But I do hope that doctor has insurence, and ya know Kurt's goatee from #469 wasn't that bad....

Rachel is quickly becoming one of my favorite characters and aside from the way the story is actually being told, I'm enjoying it.. I think we could do without showing how perverted the O*N*E agents are in every issue, but I guess a man in a robot has to do something with his time;) Anyway, I don't understand why Rachel had to sneak out of the Mansion if Wolverine is allowed to come and go as he pleases (going to Africa, on missions with all his teams, in addition to his solo missions, and God knows what else he does that Claremont hasn't gotten into yet..) Anywho, I'm just hoping the next issue turns out to be more plausible than the last one (don't you think they would've contained Sega in an airtight chamber considering he's a mass of fog??):doh!:bamf

This just in due to the popularity of Marvel Girl, Uncanny shall be renamed "Marvel Girl and her Amazing Friends"
Top

The book has become pretty Rachel-heavy lately, but I think it's just Claremont's way of assuring that all his ideas get put to good use before his run ends.. I can't wait to see what he does in the next arc (the truth behind Psylocke's resurrection!):D:D

Now if we can get the art a bit better, Uncanny may be on the road to becoming a better book.
Top

(But then I haven't read the comic yet.)
And now there's life/ And a chance to make up for all those mistakes/ But please don't get me wrong/ Cos everything was honest/ True and from the heart/ There's still the same old hang ups so don't fret/ It's not safe yet/ And who knows there's always time to screw up again
The Cooper Temple Clause
Top

I guess I should've explained.. I think just about every Marvel artist draws great Sentinels.. no clue why but they could be the crappiest artist ever but still manage to draw Sentinels perfectly.. oh yeah, and there was that issue of the Avengers when Vision was experimenting and got friendly with a Sentinel

Well I do hope that the ressurection arc shows that people besides Psylocke and Rachel are useful and use their mutant powers more than once a comic.

edited due to me being an idiot

I read issue 472 in Waldenbooks today, and though there wasn't much to the story, I enjoyed it.. I especially liked seeing Jamie in all his insane glory:eek:bamf

Alright I'm gonna lob this grenade into this thread and see what happens.

Anyway my problem with Claremonts run is that it is mostly rehashed from the 80's while it worked then but it doesn't work now.

Claremont used the Fury as the first villian in his run, but it failed it's real mission from the old Marvel Uk stories, it didn't kill anyone, you see this is why X-Men need Red Shirts like Star Trek that way someone can always die, well besides Jean. And we had that Kuroro moment

The End of History-
Nannites-Yup
"Put to Shame"- Yup

Then there was the Viper arc, which was odd since if Bishop was immune to nannites then why was he affected by Vipers? Courtney Ross/Sat-yr-9 makes a reapperance, yah.
Nannites-Yup

Uncanny #450 introduced X-23 to their buyers, and the first meeting of Wolvy and X was retconned by Kyle and Yost in NXM #20.

Then CC hits a stride of old X-Men stories, Hellfire Club, Savage Land, Mojo, and Psylocke was resurected, in her old British body, undoing everything that had been done to here in the past decade or so.

Then there was that awful HoM arc, which was a pre-NEX, and CC's attempt at adding the Omniverse to the HoM, with such rousing characters as Roma, Saturyne, several Captain Britans, and various others, but on the
hand Nocturne was shown using her powers, some that she has currently lacked in NEX. We also had Meggan jealous of Courtney, again....you think that several years of marrige would cull the jealously, possisive isn't she? and then Meg later sacrificies herself in a meaningless death.

As we march on to Decimation we get the "End of Greys" which meaningly slaughter rivals that of NXM, of course this one was approved by x-fan

Then on to the revenge arc "Wandering Star" Which doesn't really accomplish anything besides saying that the Shi'ar are bastards and Rachel is too good to destroy them.


Then to the resurrection arc, with the insane Jamie, who's not as insane as his last apperance...

, and we get the cheap anti Phoenix knockoff the Forsaken, and Jamie and his mates were called the FOURsaken clever isn't it.


So anyway to wind up my rant let me give you the main characters/focus points of each arc.

Some of y'all may have not liked Austen but at least he gave Kurt some panel time, compared to the Marvel Girl/Sage/Psylocke show that Uncanny has been since CC came along.

Exactly...and this is why I'm actually looking forward to Brubacker...at least he used Kurt in Deadly Genesis...though the every third issue donated to Vulcan thing is gonna annoyâ€¦donâ€™t give a flyinâ€™ fig about himâ€¦guess I'll be doing with that issue what I've been doing with 99% of Unlimited...buy it, bag it, board it, draw it, but not read it...

The Librarian ~ Keeper of Elfin Facts

A Touch Of Velvet

Looks around for the kamikaze deer

I bought the Uncanny books starting with the Claremont/Davis return. I

'd the baseball game but it got boring kinda fast. What with the nannites and the Fury and Viper buying Murder World off ebay..

As long as Davis was there, the art was AMAZING. (And hey - the Kuroro and the Rachel/Kurt in the Danger Room were the best parts!)

I gave up on it half-way through the dino-arc. Rachel turned into a dinosaur and Ororo was going to destroy the whole world (again) with a nuclear winter.

Reading Uncanny these days gives me an unescapeable feeling of deja-vu. And as much as I loved Claremont's work from the 80's - I'm kinda tired of the mind control, slavery, bondage, and such. Also, I have to agree that the focus is too much on too few characters.

I hope the next writer does better with the team.

I thought the start of Claremont's run was pretty good (issues 450-459ish pretty interesting), but the HoM story was pretty crappy IMO. The following arc was pretty good, in that it gave me a good understanding of Rachel and has made her one of my favorite X-Men.. I'm not really looking forward to Brubaker's run, because I've only read one issue of Deadly Genesis, so I'm not sure what to expect from him, but I'll buy it anyway (as soon as my comicbook store has a sale that is.. I don't have that kind of money

I did like the Cruelest Cut arc, and Chasing Hellfire had it's moments well most of his arcs had their moments, but those are my "favorite" arcs of CC's run.

I just found out that Brubackers first arc "The Rise and Fall of the Shi'ar Empire" will be 12 issues long....damn.