So the Amazing Spider-Man is one of the longest running and most popular comic book titles of all time for Marvel and possibly comic history. Also, it's Spider-Man, so c'mon! 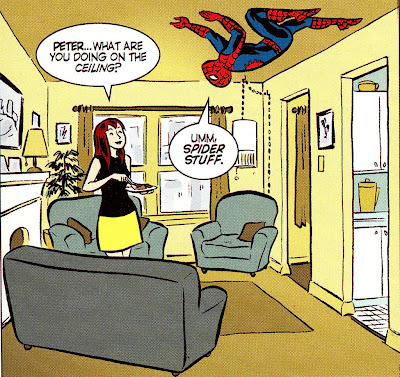 Recently a decision was made that enraged many Spider-man fans and regardless of how you feel about it, there has been great attempts by writers Dan Slott and Zeb Wells to re-imagine the character and bring him back to his prime.

Stories like Shed The Grim Hunt and Sparkplug are all sourcing back to "The Gauntlet" which is an attempt to revamp the Spider-man Rogue's Gallery. It's actually very creative what they have done for this character to undo a lot of the damage for OMD (One More Day).

However; recently, there's been an announcement of some explanation about why/how the Mary-Jane/Peter marriage did not happen in this (now canon) alternate timeline. (Yeah, I don't really get how that works either--hopefully this will make it clear).

This "Holy Union" in comic history now has been retconned and O.M.I.T. (or "One Moment In Time") is going to reveal everything. How/why it turned out the way it had.

Fortunately, even though it's being written by Joe Q., it seems to be constructed by The Spider-Fans being they have demanded better, and further explanation to why Spider-Man would have NEVER married MJ after his (totally uncharacteristic) deal with the Devil! Mephisto

Looks like we got some big plans announced at SDCC for The Amazing Spider-Man!!

xx
"I've met dozens like you. Skipped off home early, minor graft jobs here and there. Spent some time in lock-up too, I'll warrant; but less than you claim. And now you're, what, a petty theif with delusions of standing? Sad little king of a sad little hill..." - River Tam, 'Firefly'

hmmm. a variation on the classic symbiote suit.

man i use to think Wolverine had the most convoluted back history, they can't seem to get SM back on track. I for one actually liked what they did prior to One last day, the organic shooters, animal avatar stuff. And why they couldn't make the MJ SM marriage work i dont understand.

There's a very good chance that the person in that suit is Ben Reilly.

It culdn't work BCentral 'cause, quite frankly, it doesn't work. If Marvel was DC and characters aged, it'd be fine, but Marvel resets more often than DC does and unfortunately, the relationship of MJ and Peter is iconic but it's lampooned and redundant at this point.

It's not that them together isn't great but once they are... there's nothing there.

Hence the introduction of Ben Reilly in the 90's however the fans would not have of it. They don't get, Peter can't have MJ & be Spider-Man. It doesn't work, after awhile it gets stale.

Fortunately, I think Ben Reilly coming back may mean Marvel may pull a DC and say "Fine, now you don't get EITHER!" *bam* "Deal with it. Suck it up. We'll make it work, just wait this transition out!"
R.I.P. Ultimate Peter Parker

1) On the one hand I can understand the need to revamp Spider-man and go on the strength of the classic stories, where he was single and apparently "relatable" because of that. On the OTHER hand, many, many, MANY fans became fans of the character after he was married. Including myself, I first started picking up comics during the nineties, the era of Liefield, shoulder pads and a zillion unnecessary pouches (not that spidey ever wore those, but I digress...). What I liked and picked up (when I had money) was this funny, hyperactive, smart-aleck, lighthearted superhero who was crazy-in-love with his wife...

He's still funny, hyperactive and (sorta) lighthearted... but I want my pre-OMD Spidey back please, a resurrected, redeemed Harry Osbourne is great, don't get me wrong, that character actually made me like some post OMD titles... but I still want what I want, even if they just remember and restart their romance, I just want Pete and MJ back together.

2) Neon Green Spidey - Ooohh, pretty.... *watches teh shineys* wait, is there a supervillain in the background? eh... oh well... *goes back to watching the green shiney, and wondering if it is Kryptonite...*
meddle not in the affairs of ficcers for you are malleable and easily .... O_o *stares* ooh is that a cookie?

Love your enemies - It will drive them nuts!

*after reading the latest gory/depressing "mainstream" comic* ....*sigh* that's it, I'm packin' up and moving back to the Eighties...
Top

that's kinda what i still don't understand. A story can be written that makes SM interesting even if he is with someone, married or no. I dont get the lampooned or redundant commment???

but they have ret-conned it now, so be it, as i've said. I'm just hopin for good stories now that they have the direction.

My last favorite SM storyline/arc was when they began the path that lead him to the organic shooters. I did enjoy the whole outing of him, but was curious how they were gonna come back from that. A "double think" (1984 ref there) quick reboot was a cheat

I liked when Spidey was with the Avengers before the whole Stamford/Civil War mess, it gave him and his "cast"/family more characters to interact with and greater story possibilities.... as well as the chance for some humour eg: he once had an argument with his internal dialogue

i must find that and put it on here...
meddle not in the affairs of ficcers for you are malleable and easily .... O_o *stares* ooh is that a cookie?

Love your enemies - It will drive them nuts!

*after reading the latest gory/depressing "mainstream" comic* ....*sigh* that's it, I'm packin' up and moving back to the Eighties...
Top


They did not Retcon OMD.

They are reconning BND. Brand New Day. Not One More Day. And it's not retconing it's being adjusted.
R.I.P. Ultimate Peter Parker