by JackSkulls
The many procedures Chris body had been put through over the time he had been gone would have killed a human, the only thing keeping Chris alive was his healing abilities. Those abilities, however, were not strong enough to reverse everything that his captors were doing to him. His body began to change; first with his skin turning grey, hard, and cold not unlike a tombstone. The next procedure turned his hands black and grotesque, eventually turning each digit into a claw ment for tearing flesh from bones. The final transformation almost completely removed his humanity from him, turning him into a monster thats only purpose was to follow his masters' commands. Chris was now complete in their eyes, his mind, soul, and everything else that made him human, neatly locked away where it couldn't interfere with their plans for the first test run of their new mutant weapon.

The final tests were ran on Chris just to ensure that he was perfectly ready and, when all of the tests came back showing them their toy was flawless, the organization was finally ready to send their new toy out into the world. They reactivated all of his powers, gave him one last injection for the road, and sent him to the nearest small town to destroy it. His commands very simple, leave no witnesses, wipe the town from the map. The first house he stopped at held up no resistance to him, the door was easily pushed open and the first slaughtered was the devoted father trying to protect his family from the intruder. As he worked his way through the house, he killed every living being without even so much as a flinch when they screamed and begged for mercy. If the town wasn't so remote, a few of the inhabitants might have made it out alive from hearing the screams of their neighbors, but one by one the monster that now controlled what was left of Chris killed each and every living being. Once the job was done, he returned to his masters, drenched in the blood of men, women, children and even any animal that crossed his path, ready for his next target.

by Starfish
Well damn, looks like Chris got himself into quite the mess. 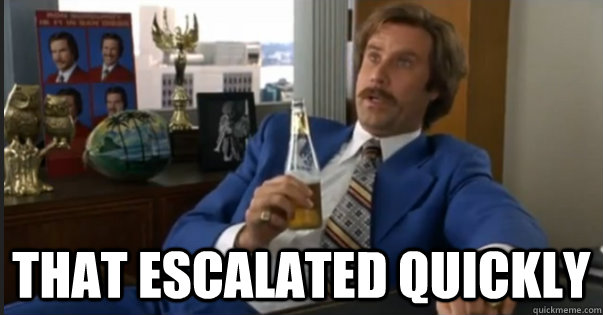 by steyn
Yeah, looks like he'll just have to be put down. Sorry Matt, at least you can think of your next character then! Yay!

by JackSkulls
Sorry about the editing, it was requested that I add a little more detail